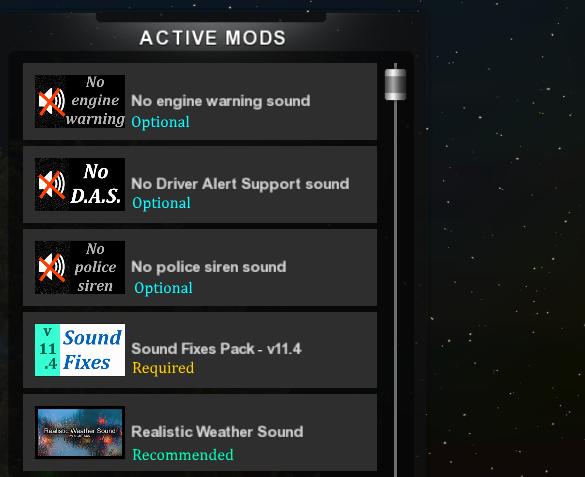 5. ENVIRONMENT
New horn sounds for AI cars. Some will do short honks (patient driver), others will do long honks (impatient driver)

2. TIRES / TYRES:
* Real interior and exterior tire sounds. Tires will resonate in the cab depending on how fast you’re accelerating and what speed you are in, giving a feel for your sense of speed.
* Heavier gravel sounds when driving on dirt roads

3. ENVIRONMENT:
* Wind will sound slightly faster from cabin when you drive at a high speed
* Pattering of rain on windshield audible inside the truck during heavy rain
* You can hear the slight sound of vehicles overtaking you or passing by you in the oncoming lane
* AI traffic vehicles given better horn sounds
* AI traffic trucks given more variations of sounds (tires, turbo, engines, gear changes)
* Gas pump and trailer coupling sounds made more realistic

(Optional) Features that can be turned off:

Options to mute these sounds can be found in the Options folder when you download the pack.
You must enable the option with higher priority than the Sound Fixes Pack to
mute the sound you don’t want.

Installation:
Mod should have higher priority than mods with a game_data.sii file.
Otherwise, correct operation of pack not guaranteed.