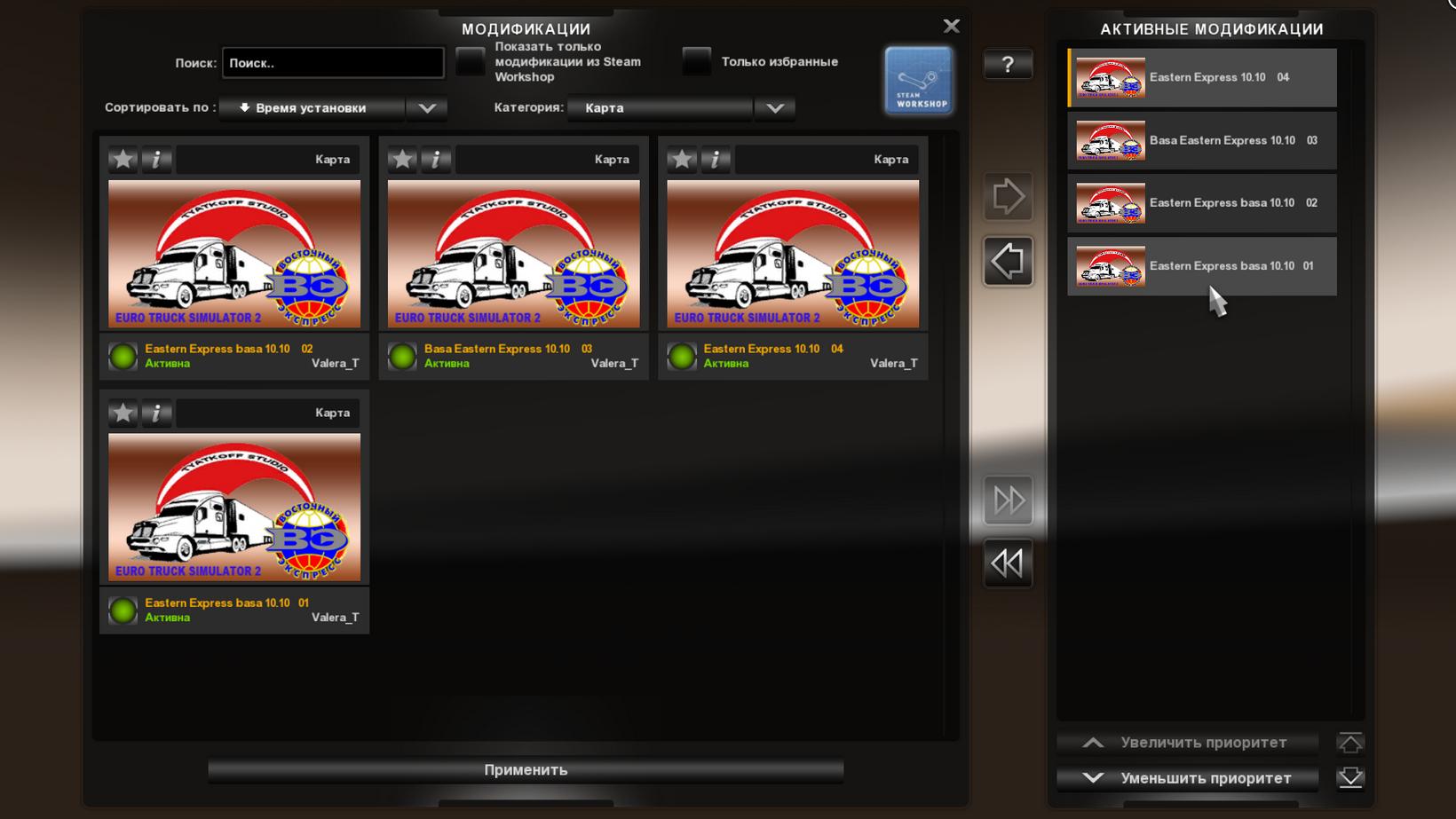 Orient Express card 10.10 – for ETS2 patch 1.31
The performance was tested on version 1.31.x, there is no compatibility with previous versions.
Test for version 1.31.x
Passenger transportation is not checked!
The file MapZoom_ETS2.scs connect at will!
The map does not work without DLC GE, DLS Scandinavia, Viva la France, Italia
Compatibility with other cards is not, except for those that are on our site!

Orient Express card installation 10.10 – for ETS2 patch 1.31
All map files and fixes of previous versions DELETE !!!
You have 4 main files:

I DO NOT RECOMMEND to put fashion on:
– to put pirated versions of the game, I know exactly piratka 1.31. not compatible with the card.
– Intensity of traffic
– real company logo
– Animated gates
– mod on Russian traffic (except adapted to the map – see on the site)
– Addons DLC Cabin Accessories_V3.8.1

Instructions for migrating to the new version:
Finish the flight and do not take a new cargo.
If you used a truck from my pack to avoid problems with the truck, do the following
– Sell the truck (if it is not defaulted) and buy the default
– Install a new mod on your truck.
– If you have a mod on the truck not from the packs, but the outside, then you do not need to sell the truck.

Save the game.
Exit the game.
Delete all old files and fixes.
Copy new files into the mod folder (now 4 files). And also a new mod for trucks, trailers, etc.
In the profile, go to the modifications and delete the old ones and connect the new files.
In the window of connected active mods, the lowest in the list should be
Orient Express card v10.9 Cargo and passenger transportation in Europe and CIS countries.
Map of Russia, Ukraine and the Republic of Belarus. Cargo and passenger transportation is carried out in CIS and Europe. Cargoes on trucks and passengers on buses

– 263 cities and townships
– working weight stations
– working system Plato
– a large base-garage in Samara with the base of the company Orient Express and Krasnoyarsk metro Sovtransavto
– all companies in Europe and the CIS have a real analog
– companies in the CIS are completely new and are not analogous to default ones.
– passenger transportation is carried out by buses between bus stations,
and in the CIS also between airports, construction sites, seaports.
– there is the possibility of transporting goods on BDF trucks (cargo-ghost) and also on tandem trailers.
– new cargo – only for CIS countries
– new trailers with logos of Russian companies
– in the last cities, such as Omsk and Novosibirsk on the bases there are animated gates

The defaulted trucks are not replaced – buses, as well as trucks for the card, are bought in their showroom.

Features of passenger transportation:
– disable the advanced simulation of the trailer coupling in the settings
– You should have about 100 thousand euros to buy a bus
– for access to passengers you must purchase a license for goods ADR 3 (gasoline, diesel fuel, etc.)
– after that to buy a bus in one of the said car dealerships
– passengers in the cargo menu you will appear on the next day, i.e. After 0 hours, you can sleep in the garage to come
next day.

You are ready to carry passengers.

Do not buy license number 3 while working for your uncle, otherwise on the road you will automatically hook up passengers instead of trailers.

Features of loading and unloading with passengers:
– fence and disembarkation of passengers is carried out by hitting the frame FRONT, and not backward as on a truck
– that is, passengers are still a trailer, only invisible, so it will be difficult for you to park it behind and
When entering the parking lot, it is necessary to make a longer
At the entrance to the parking lot, the invisible trailer was able to
take the position of the bus – then there will be no problems with the landing.
– fence of passengers, where there is an opportunity to carry out and back,
You do not have a trailer attached and nothing will stop you if
there is a possibility to park for back loading.

ATTENTION!!! ALL ADDITIONAL FASES INSTALL ONLY ADAPTED FOR THE PATCH 1.31 !!!

The correct procedure for connecting the EV card files

The game will tell you that new changes have been found – to agree with everything and continue.
The game will load most likely in your garage.
If the goods are not delivered, the delivery will be lost.

The card works on patch 1.31.X .., with 1.28 and below is not compatible.
Also not compatible with other maps except those that are on the site.
Compatibility with truck modes, traffic, etc. from other Internet resources has not been tested.