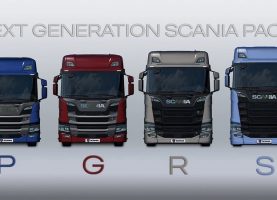 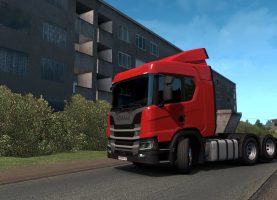 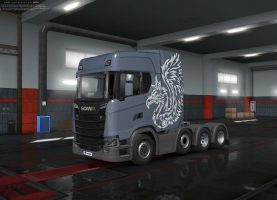 The 2.0 update obviously brings in the long avaited P and G Series, but there are also some nice additions.
This is the changelog (or atleast all the things i remembered)
– P cab (made in kind coopereation with Yukine, hats off to him)
– G cab (own development)
– New spoilers system (roof and side deflectors are bought separetly now)
– New 65 cm spoiler (P and G only now)
– Raised options for spoilers
– New rear fender system (fender top is bought separetly now)
– New medium-height fender top (doesn’t clip with trailers)
– New side storage options
– Changed 5th wheel
– 540 hp engine option
– Air filter as separate accessory
– localization tweaks
– Reworked side panels
– a small extra accessory (try to find it 😉 )

WARNING!
THIS UPDATE BRINGS SERIOUS CHANGES TO THE PREVIOUS MODEL, IT IS HIGHLY RECOMMENDED TO SELL YOUR TRUCKS IN GAME BEFORE UPDATING. OTHERWISE YOU MIGHT FACE MISSING PARTS OR A GAME CRASH

A couple of disclaimers:
– Not all of the announced features are included in this update: 40mm bumper, top exhausts, rigids are not ready.
– Mighty Griffin DLC support for P & G series will follow a bit later (needs more polishing and tweaks)